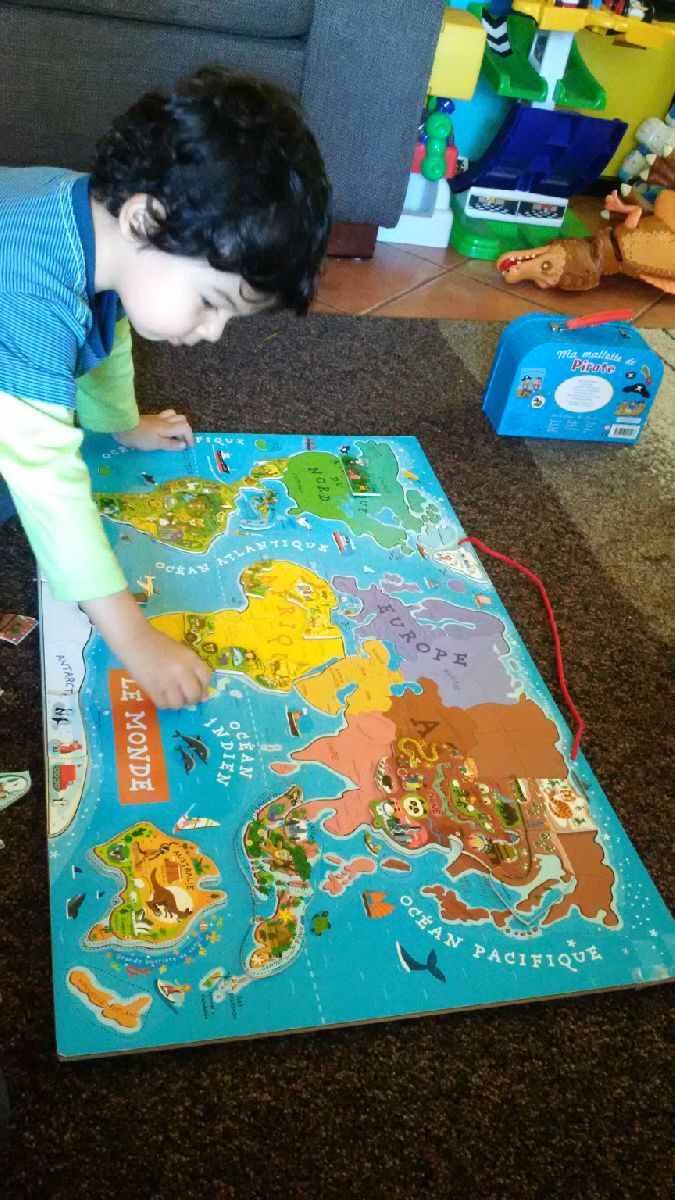 I wrote this post as a mother of multilingual children who uses games as a resource to get them to practise their minority languages. However, it could be used by anyone even a monolingual family, you can still enjoy the quality time spent together.

I am a mother of two trilingual toddlers. They speak French with me, Spanish with dad and English while at daycare.

My daughter is two and still naps in the afternoon. As we do not watch much television we get to do different activities with my son.

He is not into colouring in and tells me it is my turn every time I give him his crayons and a piece of paper.

He loves puzzles, so we spend a lot of time putting puzzles together with dinosaurs, numbers, the alphabet, the map of Australia, a world map or the solar system. My children are 2 and 3 and can identify and name the planets, moon and sun in French and in Spanish.

I thought it would be great to introduce some variety in our games. Before I start describing what our games are, I have to admit that it was not as easy as I thought it would be. The issue was not my son but me. I like to play by the rules and I had to rethink my strategy to take into account that my son’s attention span is not as good as what the game might required and as such I was taking all the fun out of the games and the time we were spending together.

First rule: Adapt the rules to suit your child’s ability to focus and tastes to make it fun.

Second rule: Come up with new rules so you encourage the practice of your target language. For example, when playing snakes and ladders, every time my son would fall on a snake’s head, I would ask him something in Spanish. Since his French is perfect for his age I want to reinforce his Spanish more. It could be ‘tell me the colour of an object that I was holding’, ‘count to 20’, ‘what do you do when you wake up’, ‘what do you play with at the park’…. If he was right he would stay where he was otherwise would slide down to the snake’s tail.

Third rule: if he is losing focus it is fine not to end the game as long as you get him talking. It is NOT important to pack the game up before it ended.

Fourth rule: try again, games and in particular board games are awesome in so many ways. You get to spend quality time with your child as long as he is not too competitive.They are great for problem solving skills, logic and building up concentration. If he/she likes the outdoor activities more, why not take a board game to the park to be used during a quiet moment.

Fifth rule: Do not have great expectations. If he does not want to play today he will tomorrow.

Sixth rule: Offer a variety of games, go to your local library or toy library and borrow them as they can be quite pricey if you are getting several from the shops.

Seventh rule: Always have fun and enjoy every minute.

Here are some of the games we play together and how we play them.

I always try to relate our games to either a story we read together or a fun fact. It helps children to memorise information by making it more relevant to them.

My son was completing his first puzzles by 14 months old. He is a good observer and has enough patience for the game.

We have over 20 puzzles at home, wooden puzzles, floor puzzles, with the alphabet, numbers, the Australian map, the world map which his favourite lately.

The world map is a French version. The countries are magnets that stick to the board so you can hang it to the wall. It makes it even more attractive. He plays very often with this puzzle and thanks to the books he has read and fun facts that we told him, he can now locate Perth, Australia where we live, Paris and the Eiffel Tower where my parents live, London and Big Ben, New York and the Statue of Liberty where his grandfather used to live, Lima and the Machu Picchu, the Great Wall of China, the Amazon forest, the Pyramids in Egypt and Mexico.

Those are places he wants to visit along with the African savannah.

We use a French version of the Junior Scrabble. He cannot spell words besides his name but we still play by adapting the game. On one side of the board there are drawings next to the written word just like a crossword for children.

We pick the letters, name them and place them on the board and see how letters put together form words. He enjoys it also because he can identify the words without reading them just by saying what the little drawing is.

It is an awesome game. We ordered it from the US, he does not exist here is Australia.

You need to make 3 trips around the board and pick up as many passengers as you can in your taxi, limousine and bus. You roll two dice, one gives you how far you can move forward and the other how many passengers will get on or off your vehicle depending on the plus or minus box where you landed.

You can speak about adding and subtracting, counting the dots on the die, describe which part of the town you are in. The school, the town hall, the supermarket, the passengers…

You can make your own, it is easy and laminated the cards are more durable or buy an already made one. You can either choose to have the cards on a single topic or a variety of topics.

Also very good to review the vocabulary they have learned and it is great fun when played in little groups.

We love construction games. Let him decide what it is going to be and if he requires your assistance. We have built dragons and their dens, towers, castles, forests for our plant-eater dinosaurs, dinosaurs, robots, houses and many more items.

It is a fun game and at the beginning my son tried to fall on the snake’s head even after I told him the rules! After a while he loses focus so to end the game quicker, he has to answer a question in Spanish every time he lands on a snake’s head.

We get to do at least a couple of craft activities during the week. Once a week we go to the Library for story time (in English), my children do craft afterwards and every Saturday I take my son to the French and Spanish workshops for children I run where we also do craft to reinforce what we have learned during the session.

This is my little learners’ favourite by far. Last two terms as the weather warmed up we ran our language workshops in parks. Parents and children loved it. We would sing songs, learn vocabulary on the topic of the day then the children would have a short break in the playground. They would come back ready to focus again on an activity related to the topic we studied and for craft.

We were lucky to organise a few ‘I spy’ games. We went to the museum, to playgrounds with pirate ships and volcanoes and to Naturescape which is a park with a spring, a lookout, huts that children have to build, and many things to climb on and explore… I will give them a mission in the form of a laminated sheet with pictures and a short comment in Spanish and in English. They had to find all the items and tell me ‘I see and the name of what they found’. They simply loved it. A fun way to learn the language and they remain concentrated for the full hour.

Again you make your own or buy some already made. I have a couple of sets from Montessori and they are touch and feel ones to simulate writing. I also took the mega blocks and asked my son to place the blocks under the cards according to the number on the cards.

I made a few for my language workshops with everyday words and objects (house items, animals, toys…) and the ones in the above picture were about opposites. The children had to find the opposite cards to review the vocabulary they had just learned.

There are so many games that you can use but I will keep pictionary and the monopoly for when they are older.

At home as well as in my language workshops I teach with play based activities. Children do not even realise they are learning because it is fun. You do not want to make it tedious or they will be reluctant next time you want them to play with you.